Among the southeast asian top destinations, Myanmar is well-known for its many unique and maleficent religious monuments. This is primarily due to the eclectic nature of Burmese Theravada Buddhism, which incorporates elements from a range of sources. Dazzling pagodas, shrines and stupas are sprinkled all over the country’s landscape. Here is our guide of the top 6 Buddhist monuments to visit in Myanmar. 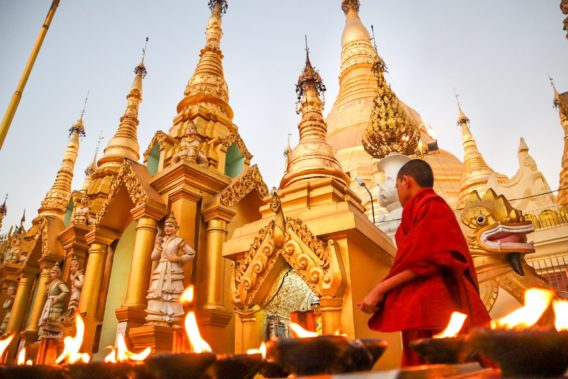 Shwedagon Pagoda, also known as the Golden Pagoda, lights up the hill in downtown Yangon. This most sacred site for Myanmar’s Buddhists is a 99-meter-high pagoda encrusted with gold, diamonds and gemstones. The pagoda is around 2,500 years old and is a place to enshrines strands of Buddha’s hair and other holy relics. This impressive construction is covered with hundreds of gold plates and the top of the stupa is encrusted with 4531 diamonds; the largest of which is a 72 carat diamond. It is hard to deny Shwedagon Pagoda is a world religious wonder and a repository of Myanmar best architecture, sculpture and arts. While being here, you can see devotees and monks washing statues, offering flowers, practicing worships and meditation. The shining Shwedagon Pagoda definitely is one of the best Myanmar Buddhist Monuments you cannot miss. 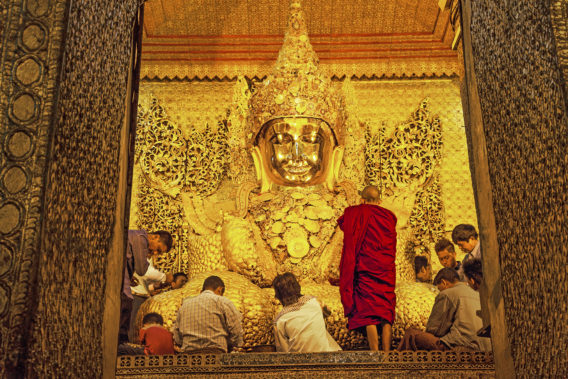 In Mandalay the huge Buddha statue at Mahamuni Paya Temple is a famous Myanmar Buddhist monument. Believed to be more than 2,000 years old, the site is a major religious significance where followers visit everyday. The massive statue was seized from Mrauk-U in 1784 and housed in Mandalay ever since. Inside the temple, from the central shrine with its multitiered golden roof, long concrete passageways leading in each cardinal direction are crammed with stalls selling all manner of religio-tourist trinkets. A frieze of paintings in the pagoda highlights this story. Mahamuni can be conveniently visited en route to Amarapura, Inwa or Sagaing. 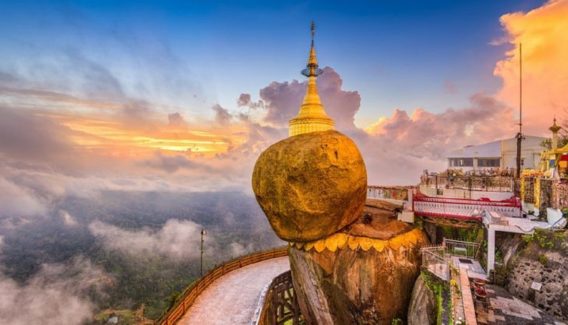 Forming one of the most ethereal spectacles in Southeast Asia, Kyaiktiyo or the Golden Rock Pagoda is a popular pilgrim site among Buddhists. It is located at the summit of Mount Kyaiktiyo, 1,100 meters above sea level. Placed on the very edge of a hill as if it was defying gravity, the legends say the rock is supported by a hair of Buddha and that is the reason why hundreds of thousands of Burmese come every year to revere it. When you are there, you can feel a ambiance of excitement, happiness and high devotion. Along with the Golden Rock Pagoda, you’ll also find there a huge complex of temples, restaurants, guesthouses and other institutions. The Golden Rock is perhaps the most unique attraction among Myanmar Buddhist Monuments list.

#4 The temple complex of Bagan 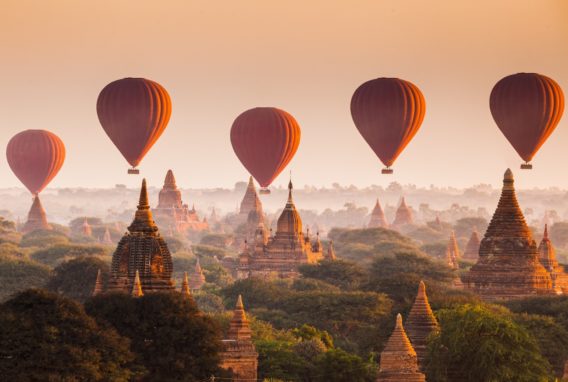 This world famous destination is what make Bagan one of the must visit sites in Southeast Asia. Bagan was the capital of the Kingdom of Pagan from 9th to 13th centuries. This kingdom was the birth place of Burmese culture and ethnicity, and the place where Theravada Buddhism was introduced to the region. Sprinkled all over the city are 2,200 plus temples, stupas and pagodas, each has its own unique story to tell. It is truly magical to stand atop Thatbyinnyu Pahto temple to take a view over the countryside and the entire complex of Bagan. However, the best way to have a look here is take an air-balloon ride flying over the ancient temples and pagodas stretching as far as the horizon. The best time, as you can guess, is at dawn or sunset when the scenery in front of your eyes is coverd in vivid colors of the sky. 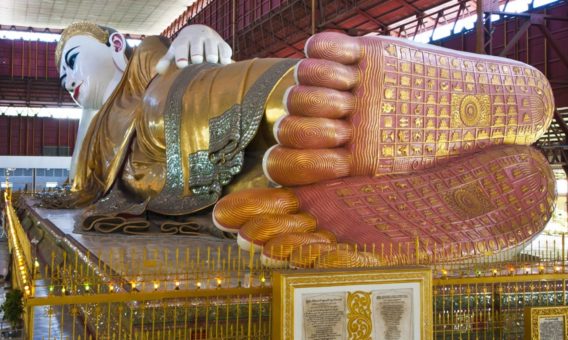 Located in Tamwe Township, Yangon, Chauk Htat Gyi Pagoda is famous for its huge statue of Reclining Buddha. Not really a pagoda in the traditional sense, the Kyauk Htat Gyi is more of a pavilion housing the 70-metre colossal reclining Buddha. The sight is really impressive , it might take a professional photographer to capture the whole length. The Buddha is highly decorated too, with coloured lips and eyes, as well as exaggerated earlobes. At the Buddha’s feet, there’s a small shrine where people come to pray, burn incense sticks and offering flowers. Next to the complex is a popular meditation centre and number of different monasteries. Chaukhtatgyi is also a popular haunt for local astrologers and fortune tellers. 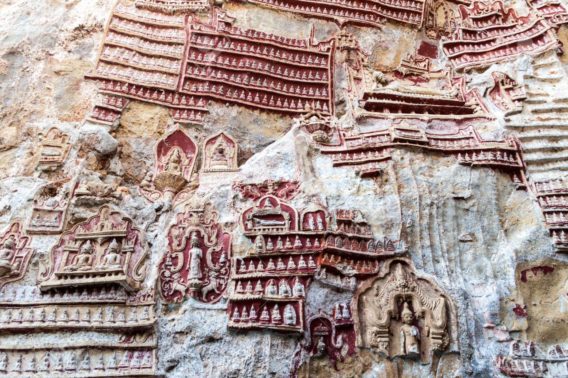 The most marvelous destinations in Hpa An Myanmar are no doubt the Kawgun and Yathaypyan Cave. These temple caves of 13 km long are believed to be cconstructed by King Manuaha after he was defeated in battle and had to take sanctuary in the caves. The 7th-century artwork of the Kawgun Cave consists of thousands of tiny clay buddhas and carvings plastered all over the walls and roof. Despite early ancient foundation, the Buddhas statues in Kawgun cave are still in good condition with various shapes and poses. The other amazing thing here are the stunning wall sculptures. Over a mile away, Yathaypyan Cave contains several pagodas as well as a few more clay wall carvings. It is also favourite spot of the local macaque monkeys. To visit these caves, avoid the rain season (June to October) when they are partially inaccessible.

To have a fully aunthentic experience in Mynamar, choose your best itinerary here or contact for tailor-made tours.