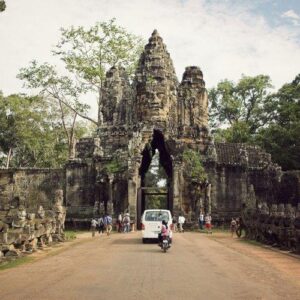 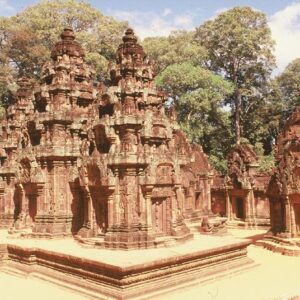 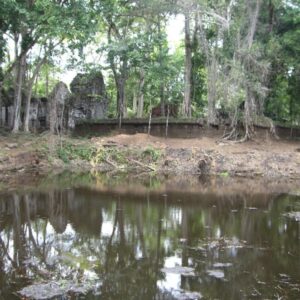 Early morning we depart to Anlong Veng to visit Ta Mok’s House, then the Pol Pol’s House, two of the most four powerful men during Khmer Rouge Regime. On the way back, visit Banteay Srei and Banteay Samre temple.
Overnight in Siem Reap.

Morning excursion with tour guide to visit Koh Ker temple, the remote 10th century capital of Khmer Empire for a very brief period from the year 928 to 944 AD, located in Preah Vihea province. Left to the jungle for nearly a millennium and mostly un-restored; this great archaeological site has been rarely visited until very recently. Afternoon return back to Siem Reap with visit Beng Melea, the largely temple overrun by vegetation and very lightly visited by the tourists, giving it an adventurous, ‘lost temple’ feel. It was built in early 11th century by the King Suryavarman II. Overnight Siem Reap.

Morning excursion transfer to Silk Farm at Puok district – 15 km west of Siem Reap. On the way enchanted by rice paddies and water buffalos, stilted houses and little villages as a cultural experience. This is where visitors can witness start-to-finish silk creation – growing and harvesting mulberry (food for the silk worms), the breeding process and life cycle of the silk worm, collection of cocoons, separation and spinning the silk, the dying process and the creation of beautiful silk weavings on wooden, multi-harness hand looms can all be seen. Return back to Siem Reap for lunch.
Afternoon visit Cambodian Cultural Village – A unique, sprawling new cultural attraction in Siem Reap, intended to introduce the visitor to Cambodian culture and history. Overnight Siem Reap.

Morning free at leisure until transfer for departure flight.

Referencing to my mistake talked about up above, when I arrived in Cambodia, I proceeded to withdraw hundreds of Cambodian Riel. But the thing is… even though it’s the local currency, no one — not even the locals — use it.

Everyone and everything uses U.S. dollars.

Case in point, forget about the Cambodian Riel — unless you’d like it for souvenir reasons — and stick to using U.S. dollars for everything.

So, if you’re planning on visiting Angkor Wat or some other temple, bring along long pants and a t-shirt.

Don’t be like me and arrive to the temple complex in shorts and a tank top. I ended up having to buy a sarong and a Cambodia t-shirt to cover up for a stupid amount of money.

A very naive mistake in my opinion, since I’d been traveling around Southeast Asia for the past two and a half months, but nothing I can do about it now! Funny thing is, that sarong came in handy for the rest of my travels and the t-shirt turned into one of my favorite tops. So I suppose it all worked out!

Despite what you may think – okay, what I previously thought – the Angkor Wat temple complex is absolutely enormous and much bigger than what visitors may expect.

Even though it’s frequently referred to as Angkor Wat, that’s just the main temple complex but the UNESCO World Heritage site is actually 20-something temples sprinkled around an area of about 250 square miles. Did someone say holy crap?!

Case in point, this place is absolutely massive. And it takes quite a bit of time to wander around all of it.

Thus, I suggest getting the 3-day pass — which is $62 — over the 1-day pass ($37) and the 7-day pass ($72). One day is definitely not enough time, unless you only want to explore the temple of Angkor Wat and maybe the Bayon Temple.

And seven days is way too long, as you’ll definitely experience temple burn-out.

That’s why I suggest purchasing the 3-day Angkor pass.

Even though I experienced temple burn-out and ended up spending only two days at Angkor Wat, I’m very happy I purchased the 3-day pass because it allowed me to spend more than one day there, which I don’t think would have been enough time to thoroughly see everything.

(Not to mention, the 3-day pass is great if you’re spending more than a week in the country, such as 10-days in Cambodia or even a couple weeks! A longer trip means more freedom to take your time seeing all the underrated and under-visited temples.)

Sometimes tuk-tuk drivers will urge you to pay them before you’ve even left your current destination but do not listen to them! I cannot stress this enough, only pay the driver after you’ve arrived at your destination.

If you pay them before you’ve arrived, you’re much more likely to be scammed, as they could take you only half way or something and kick you out. Or just drive off with your money. Or ask for more to take you the full way to your destination. It’s just not worth it; find a tuk-tuk driver that won’t hassle you into paying before you depart.

From your bus ticket to your room purchase, make sure to have it allllll written down to verify it if anyone asks.

When I was traveling from Phnom Penh to the small island of Koh Chang in Thailand, the group and I purchased transportation the full way there. From our hostel in Phnom Penh, to the border of Thailand, from the border to the ferry port, and the ferry ride to the island.

We had it all planned out…

Or so we thought.

Turns out, since we didn’t get our transportation specified and written down to verify it, our plans at the border got completely messed up. We ended up having to pay quite a bit of money to get a private taxi from the border to the ferry port and a ferry to the island.

It was ridiculous and extremely stressful. Thus, I suggest having everything written down if anyone tries to question your purchases.

A lot of the time, children will approach tourists asking them to buy their postcards, gum, or trinkets to help them pay for school. But this is not true; the money doesn’t go to school fees and it just encourages them that begging for money is better than going to school. Thus, just continuing the cycle of poverty.

For example, a child will approach a tourist asking them to buy milk for the baby they’re holding (which is sometimes drugged to look worse). A lot of the time, the cute child is hard to ignore and the tourist sees no harm is purchasing the milk directly from the store.

But, when the tourist is out of site, the child will return the milk and get the money back. The shopkeeper takes a chunk of the money and the rest usually goes to the cartel.

It’s a hard cycle that keeps on going. So, whilst in Cambodia, please don’t buy anything for or from the children on the streets.

If you’re traveling to Cambodia for a good amount of time, or have some free days, make sure to do yourself a favor and head down to the coast.

Get out of the hectic cities and just relax on the beautiful beaches with your toes in the sand. It’s definitely a nice break from the craziness of the cities, like Phnom Penh and Siem Reap!

In order to obtain a visa for Cambodia, you’ll need $35 USD in cash and a passport size picture to get one. Although, I don’t think they’re very strict on what passport size picture you use. For example, I used my passport picture from when I was 13 years old because that’s all I had… and it worked.

I’m now 22… so not sure if that’s a good thing or a bad thing. Either I look like I’m a prepubescent teenager or they just don’t care that much.

When traveling around Cambodia, just stick to buying bottled water from convenient stores. Or purchase a filtering water bottle, like this one (which I personally use and LOVE). Or if you’d like something small, this filtering straw is easy to pack and works awesome (which I’ve also used while on a road trip in Canada

Whilst on the beach, expect to be approached by a multitude of ladies asking to wax your legs, paint your toenails, or pluck your eyebrows. And they’re usually relentless.

They stick around and hover nearby until you get extremely annoyed and tell them no about 50 times. Just make sure to hold your ground if you don’t want or need their services and politely say no.

If you’re walking through the streets, don’t insult the Buddhist culture by wearing skimpy clothing or something (like a bikini top or going shirtless). And since around 95% of Cambodians practice Buddhism, it’s just easier to respect their customs and traditions and cover yourself up a bit. Just make sure to be respectful and keep their religion in mind!

Another tip: If you’re wandering around and you’re a female, pack along a small scarf. This makes it easy to cover up your shoulders, which is necessary when visiting temples!

This isn’t really a necessary tip to make traveling around Cambodia easier, but it’s something I wish I would have known beforehand.

Unlike Laos or Indonesia, I found Cambodia to be much more laden with trash. Like the streets and little alleyways of Siem Reap and Phnom Penh are ridden with just enormous piles of garbage. It really threw me off, as I was not expecting it.

Make sure to pack along plenty of water and sunscreen (preferably a ZERO waste sunscreen that’s good for you and the planet), as it’s extremely hot, humid, and sunny when traveling around Cambodia.

Water is probably the most important thing to pack! Need to keep hydrated, as even if it’s a rainy day, you’ll be sweating your butt of due to the stifling humidity. And as mentioned above, make sure to buy bottled water and don’t drink the tap!